It's time to place out your mosquito killers! We recommend doing it as early as possible for the best possible mosquito catch. If you catch the first female mosquitoes before they have time to lay their eggs that can be up to 1000, you reduce the mosquito population right from the start! 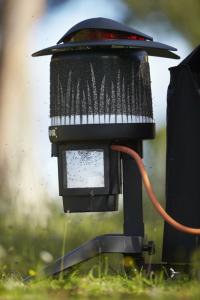 Predator Dynamic and SkeeterVac attract mosquitoes and gnats by LPG and octanols that emits a human-like smell. Rapid Action has designed three different scents that are adapted to specific needs. The black octanol is a standard scent and attracts mosquitoes. The green octanol is designed to attract both mosquitoes and gnats. The red octanol attracts slightly more tropical mosquito species such as tiger mosquitoes and other newly arrived species. These mosquito killers have an additional method of capture as they have a sticky paper that sits on the engine of the mosquito killer. Mosquitoes that are not sucked in by the fan get stuck there.

There is also smaller electric mosquito killers that do not need LPG. Since these do not have that attractant, a smaller electric machine is recommended for those who do not have as big a mosquito problem. The AMT200 is an updated version of the well-known AMT100. There is also a smaller model called the AMT50. These machines use Rapid Action's scent system, like the Predator and SkeeterVac.

JavaScript seem to be disabled in your browser.

You must have JavaScript enabled in your browser to utilize the functionality of this website.